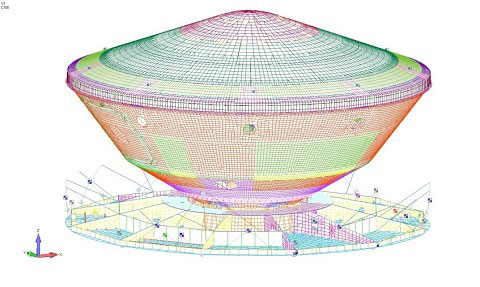 Femap with NX Nastran was critical in performing all types of finite element analysis on all aspects of the vehicle. Each component of the vehicle had a higher level, loads-type model built, and these models were joined to create the full spacecraft model. Engineers at NASA's Jet Propulsion Laboratory used Femap on virtually all of the spacecraft itself and its payload. Simulation analysis was applied using Femap for pre- and post-processing. Simulations performed before part and system production included linear static, normal loads, buckling, nonlinear, random vibration and transient analyses. Thousands of design decisions were made using information from Femap simulations.

We're available by phone (844-GEO-SUPT) or email (This email address is being protected from spambots. You need JavaScript enabled to view it.)
Monday–Friday, 8am to 5pm EST.

Notice: Only variables should be assigned by reference in /home/geometricsol/public_html/modules/mod_lhnhelpout/mod_lhnhelpout.php on line 14

We use cookies to improve your experience. By your continued use of this site, you consent to the placement of these cookies. Read more I AGREE